Purple loosestrife (Lythrum salicaria) is a woody half-shrub, wetland perennial that has the ability to out-compete most native species in BC’s wetland ecosystems. Dense stands of purple loosestrife threaten plant and animal diversity. They can choke out potentially rare and endangered species of native plants while dominating the area to the point of creating a monoculture. Plants holds little food value, cover and nesting material for animals and leads to a reduction in habitat diversity. This can lead to the extirpation of the animal from its natural habitat.

In large infestations, purple loosestrife can block water flow in canals and ditches that are used for agriculture leading to a reduced productivity in some agricultural crops.

Considered regionally noxious under the BC Weed Control Act, purple loosestrife is found in wet areas at low- to mid-elevations, growing in ditches, irrigation canals, marshes, stream and lake shorelines and shallow ponds. It is common in the Lower Fraser Valley and frequent on southern Vancouver Island and in the Okanagan. There are also localized patches in the Kootenay and Omineca regions.

Shrub-like in appearance, purple loosestrife has stiff, four-sided stems ending in dense spikes of showy purple flowers. Plants have narrow, stalkless leaves, growing up to 3 metres in height at maturity.

Often confused with fireweed, purple loosestrife is an escaped ornamental that tolerates a wide range of weather conditions and will grow in standing water. Seeds distribute through water, humans and animals, with a single plant producing over 2.5 million seeds that drop in early fall when temperatures cool.

A few native and ornamental alternatives to plant instead of purple loosestrife include: Blazing Star; Tall Delphinium; Bloody Iris; Hardhack; and Spike Speedwell. Read more about these alternatives in the Grow Me Instead booklet for BC.

Refer to Weeds BC for information on prevention and control methods. 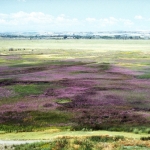